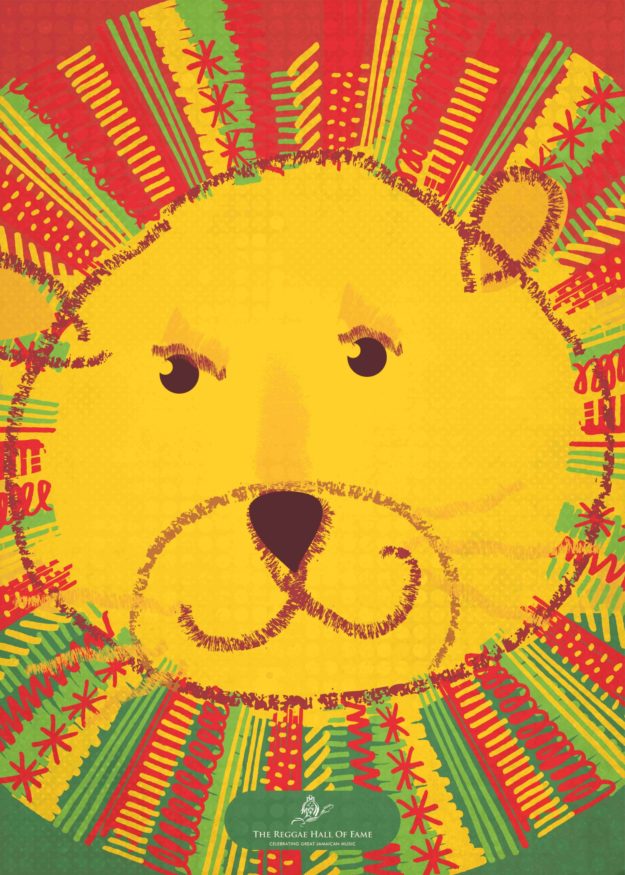 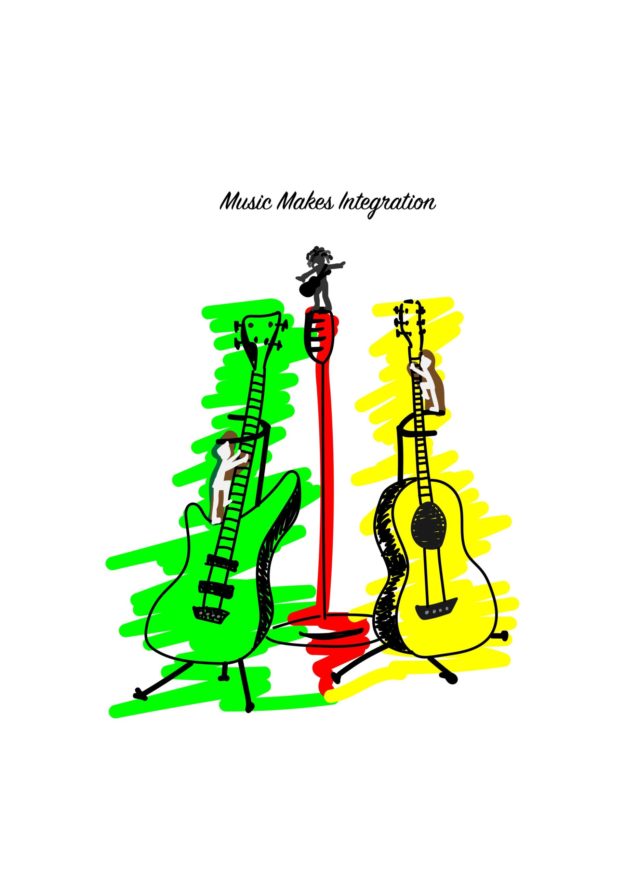 The idea of the design is mainly from the representative history of Bob Marley’s life. I am moved by the sacrificing and generous act of Bob Marley who had great courage to express his belief to the public with penetrating lyrics in his music and his real action taken to promote love, peace, respect and equality. The scene of joining the hands of two politicians, who were full of hatred with each other, impressed me the most. The poster, therefore, comes from this idea.
Regarding the poster, there are three instruments or music tools are easily observable. They are bass guitar, classical guitar and a microphone. These music tools represent Reggae as Reggae is created and performed with them.
Moreover, there are totally three people who stay on a music instrument respectively. The one in the middle is Bob Marley, who is at the top among three, saying that he is the most representative person in this movement and in promoting Reggae. I try to show the characteristic of Reggae’s hair cut in order to hint that who he is. The other two are the two politicians who are from different parties opposite to each other. However, they are both go towards Bob’s hug because of music.
In addition, most importantly, the colours of three people do mean something. the dark Bob and the white politicians come together means that Bob contributes a lot to motivate the integration of the blacks and whites in the past with Reggae.
Finally, there are three colour painted on the music tools, which represents that Reggae belongs to Jamaica. 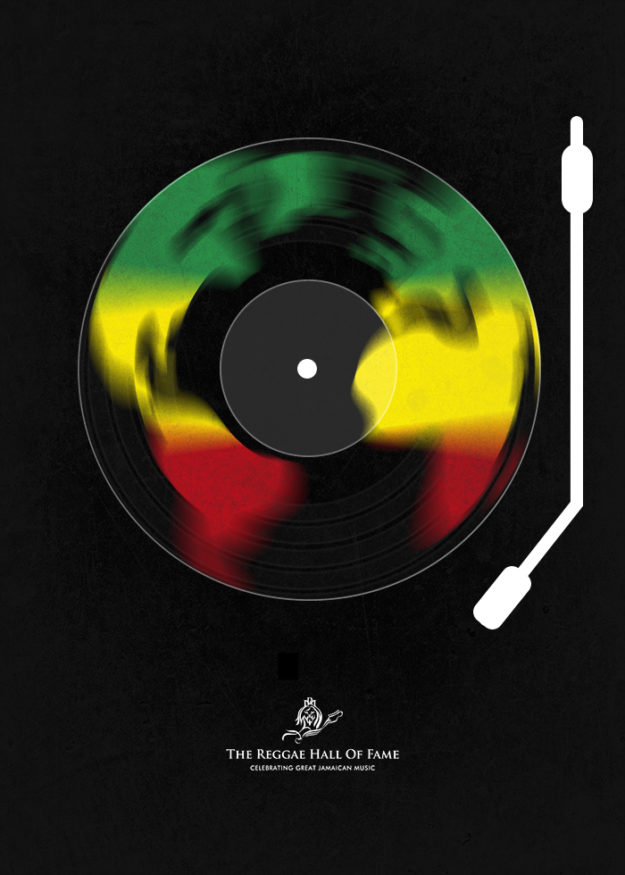 The music of Earth | Russia

This poster translates that Jamaican music is music of Earth. On the poster we can see vinyl record playing reggae and this music makes Earth spin. 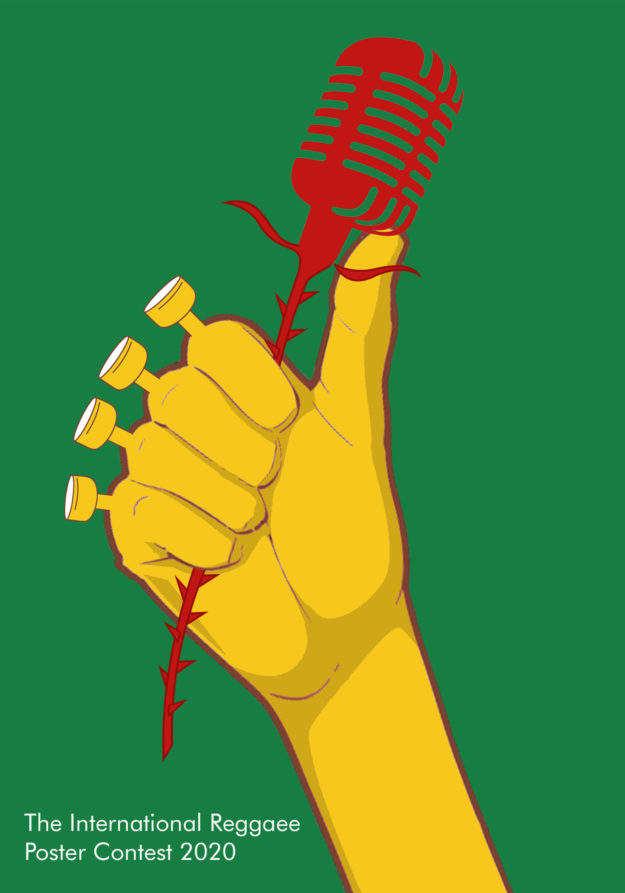 I used the colors of Jamaica’s three colors and I used a combination of thorn and mahogany to make the protest a musical. 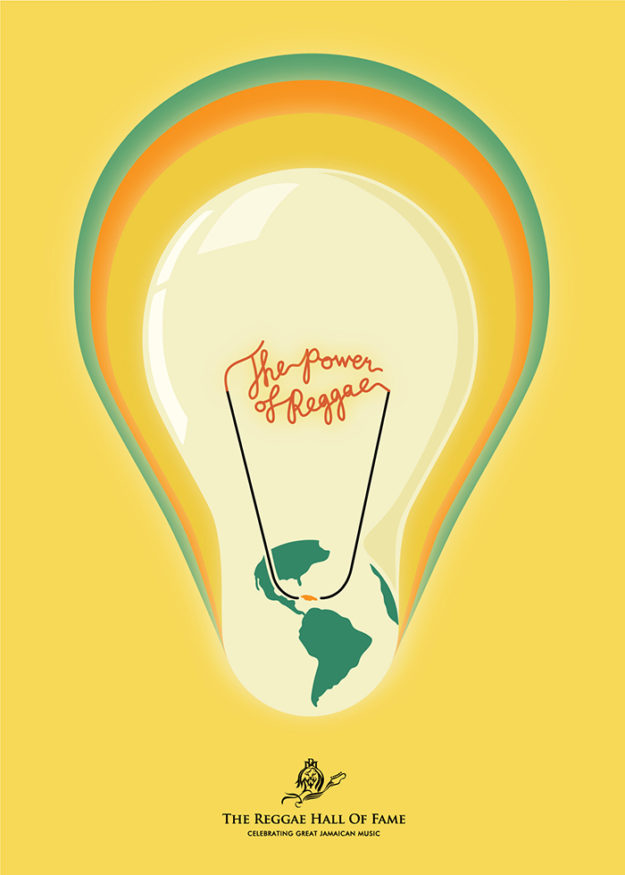 The Power of Reggae | Finland

The idea for the poster came from reggae music’s positive influence on the world. Reggae brings people hope and happiness, but it’s also an important channel for bringing up difficult issues. In the poster Jamaica is the heart of a light bulb, that lights up the rest of the world and universe with its positive and energetic reggae music. 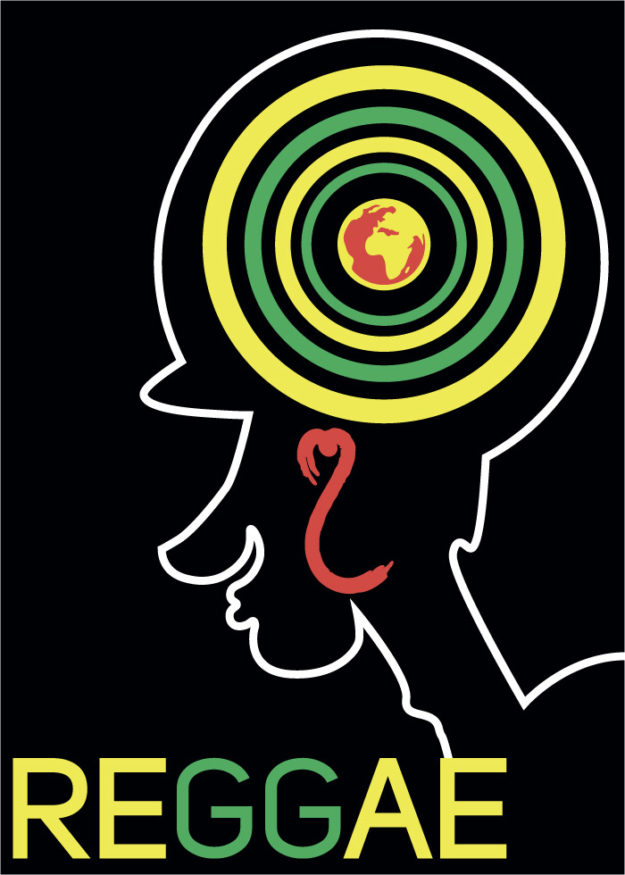 Love is the only thing that unites all people from any corner of the world. And I wanted to use this particular communication channel to show that this LOVE precisely the Messages from Jamaica to the World. Love, Listen, Create. 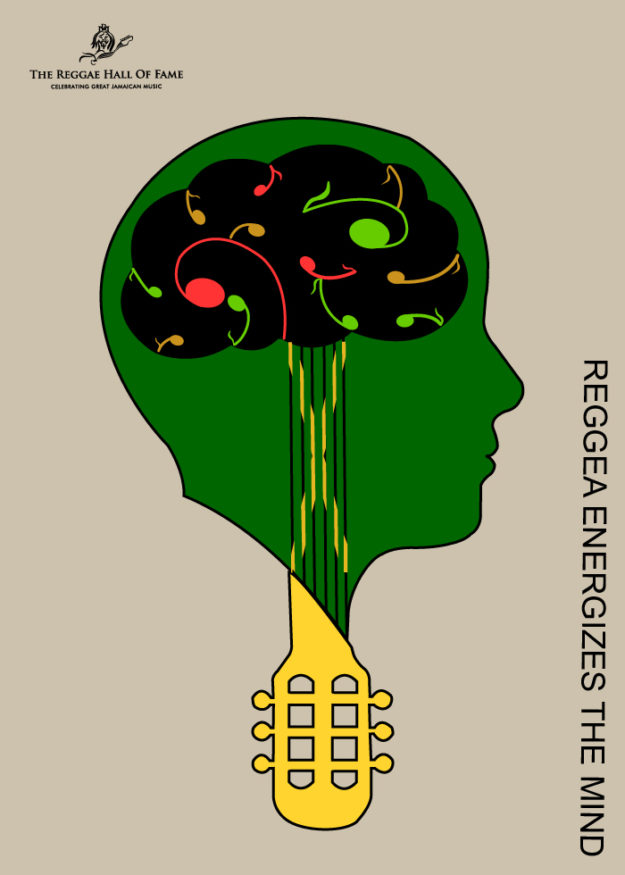 A guitar is made up of people’s head. People’s thoughts become colorful because of reggae. You can see the notes of red, yellow and blue are interspersed in the mind. There are small patterns on the strings running through it. You can find that it was the Jamaica flag. When you look far away, you can see that the core of the poster was constructed with the color of the Jamaica flag to celebrate the great Jamaican music!! 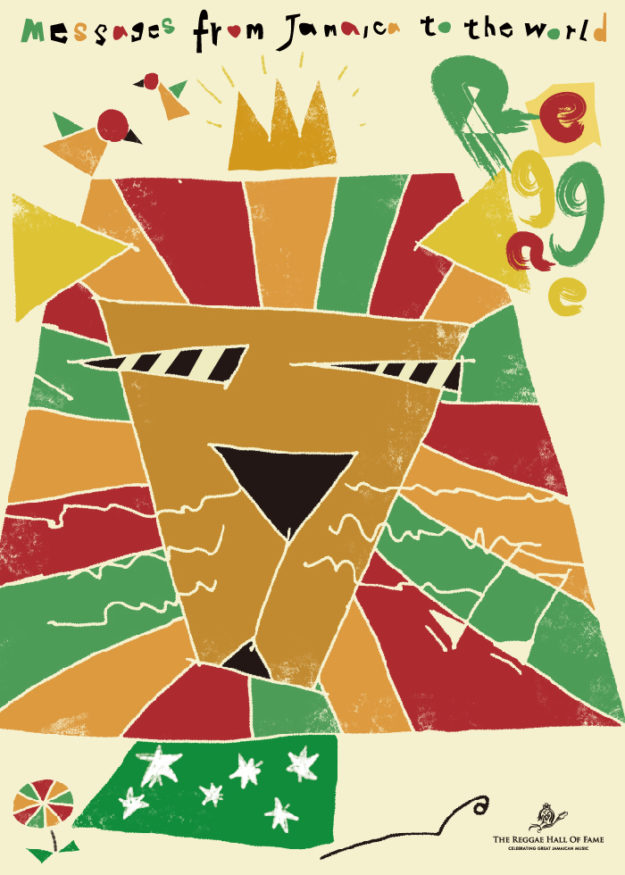 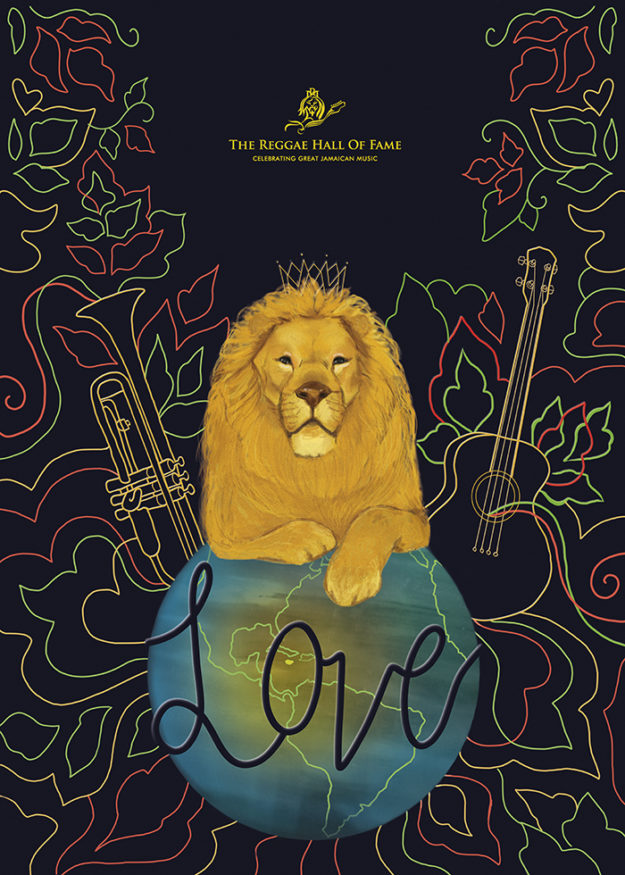 I wanted to make a poster that is colorful, fun, powerful and full of story. That’s how I see reggae music as well. I think the most important message in reggae music is love for one another.
Colorful lines in the background represents the rhythm of the music and the warm feeling from listening it. Also you can see warmness spreading to the World from Jamaica. Big lion shows the strength and pride of reggae music culture. 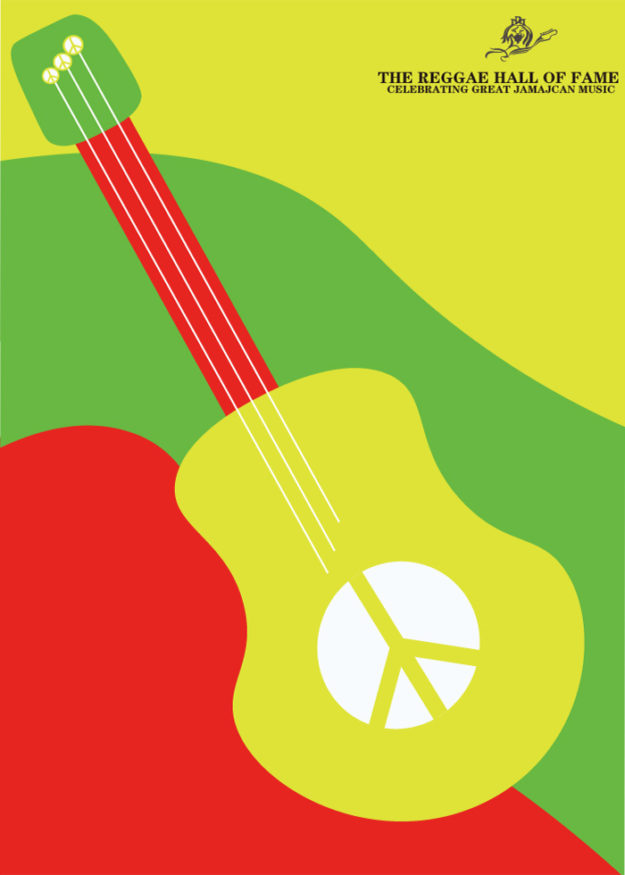 Peace and love in the REGGAE | China

Above music, peace and love