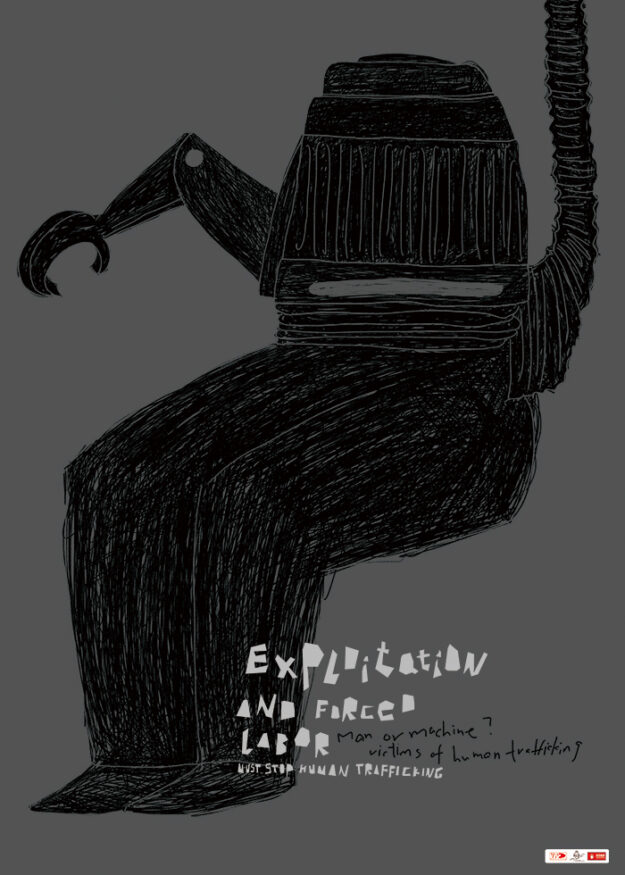 This poster combines human with machine to show that exploitation and forced labor make human not human. 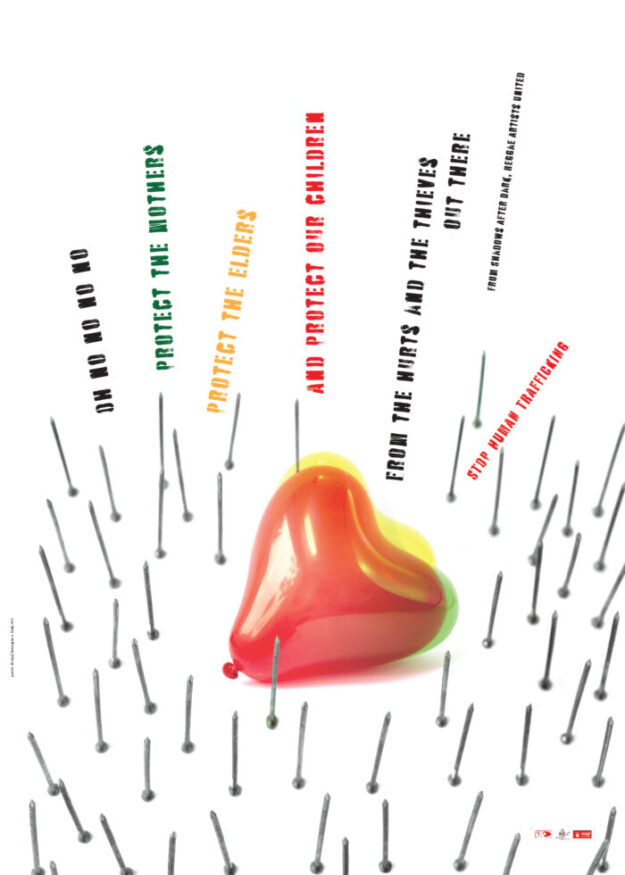 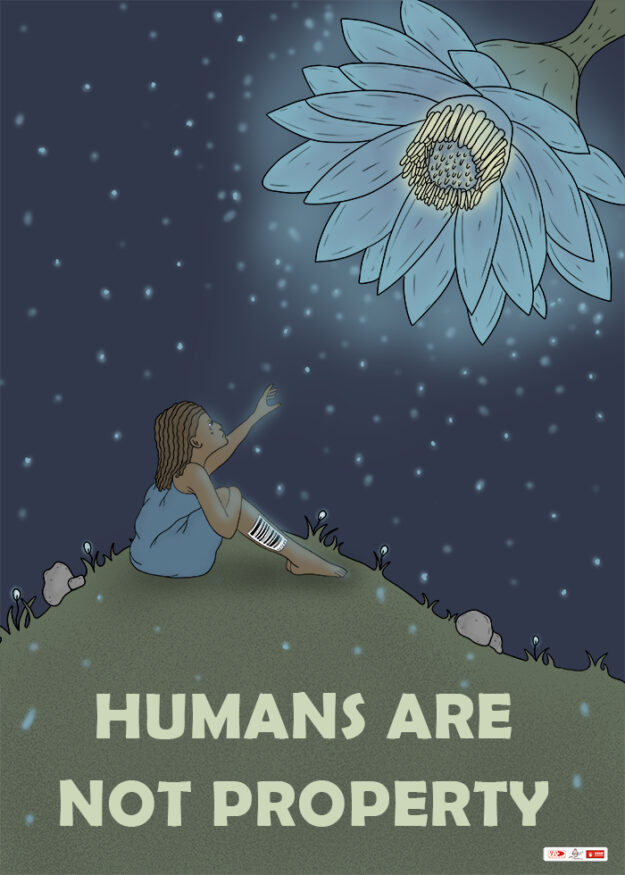 In my poster I wanted to cause impact and transmit the message, for that I included a little girl, victim of trafficking sitting on the top of a hill, the elevation meaning the course she had to go thru, reaching for a glowing lotus flower, a flower many times associated with human trafficking as it symbolizes renewal and superation, a flower that rises from the muddy waters and blossoms into a beautiful flower, representing the journy many of these victims had to go thru, so in the poster you can see the girl reaching for the flower as only her hopes prevail during those times, the color blue is also used in the flower and in the girls dress as it is the universal color for human trafficking prevention. 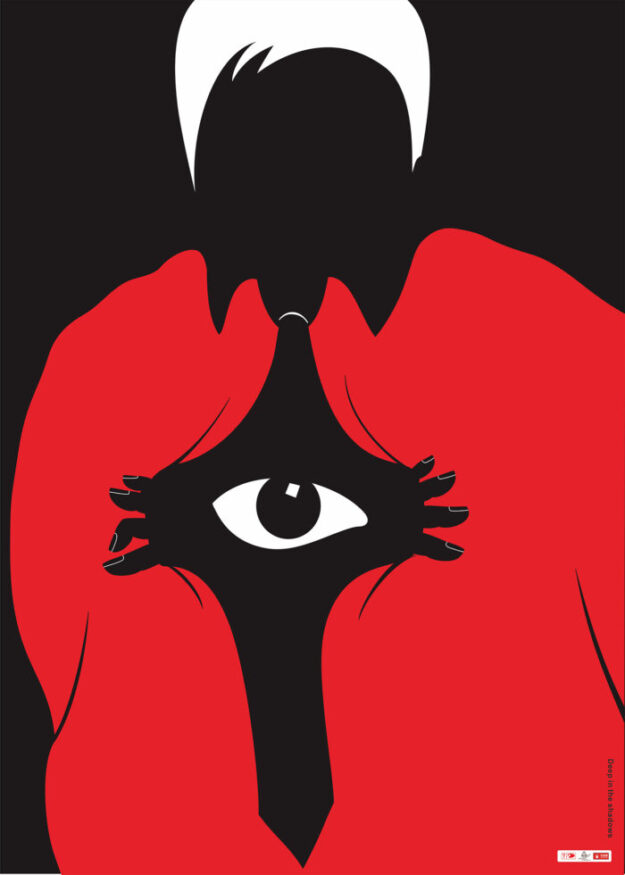 deep in the shadows | China

You don’t know what this person’s heart is thinking, he is looking at you and is going to sell you, be careful of such a person 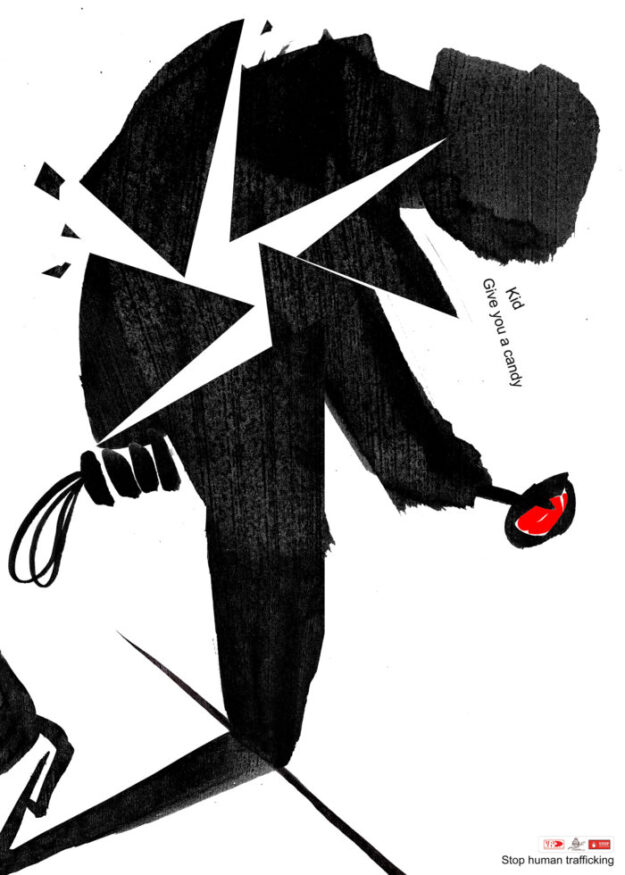 Broken the shadows, save the children 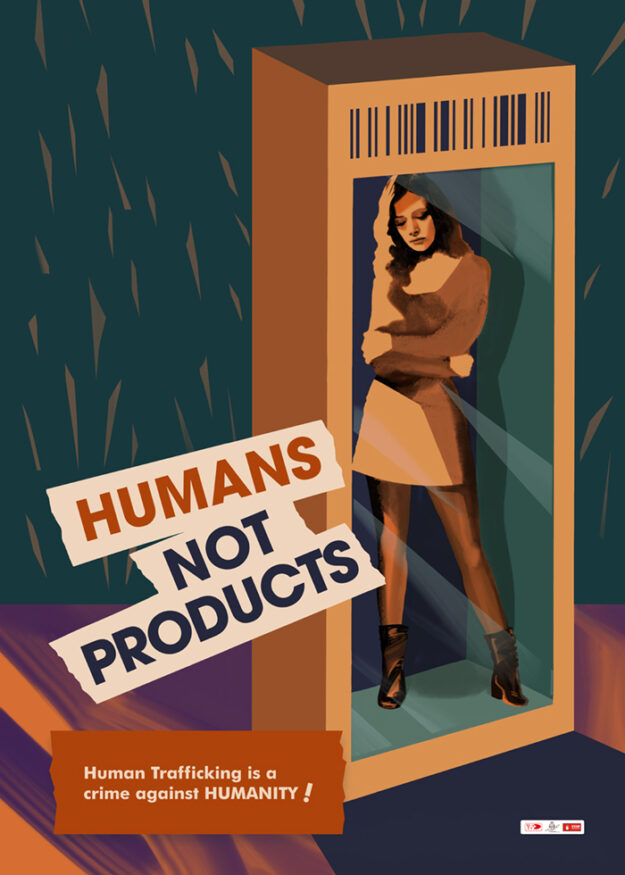 Human trafficking is “a crime against humanity” as it denies the victims’ human dignity and sees them as mere products to be used to enrich another. In this poster, there is a sad, young woman standing inside a box. She is like a doll in its box waiting for being sold in the store. I wanted to emphasize that, in the eyes of the human traffickers who put her in this situation, she is no different from any other product. Therefore I arranged typographic elements as tags. 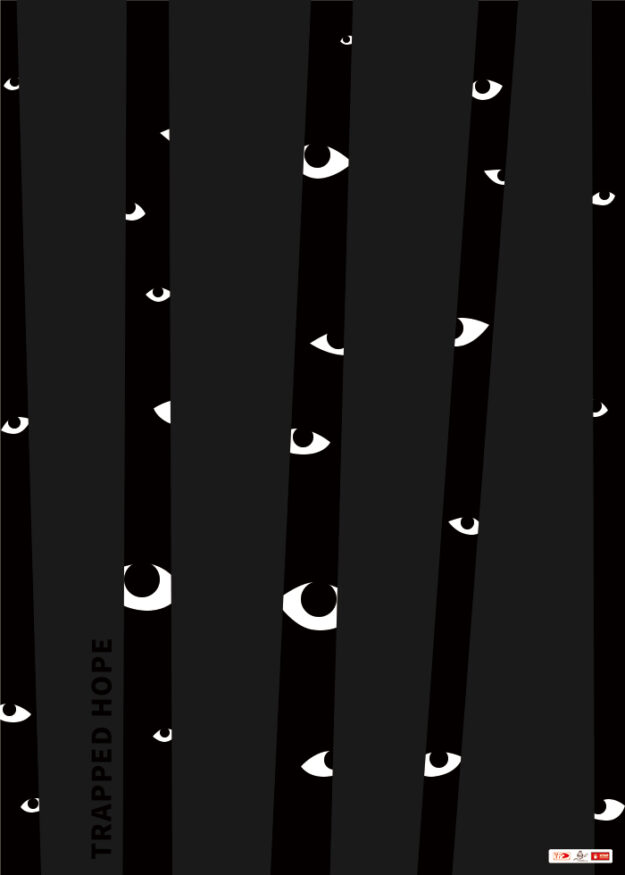 If our children are trafficked, they will lose their hope and so will we. We must protect our hope to grow up healthy and happy. 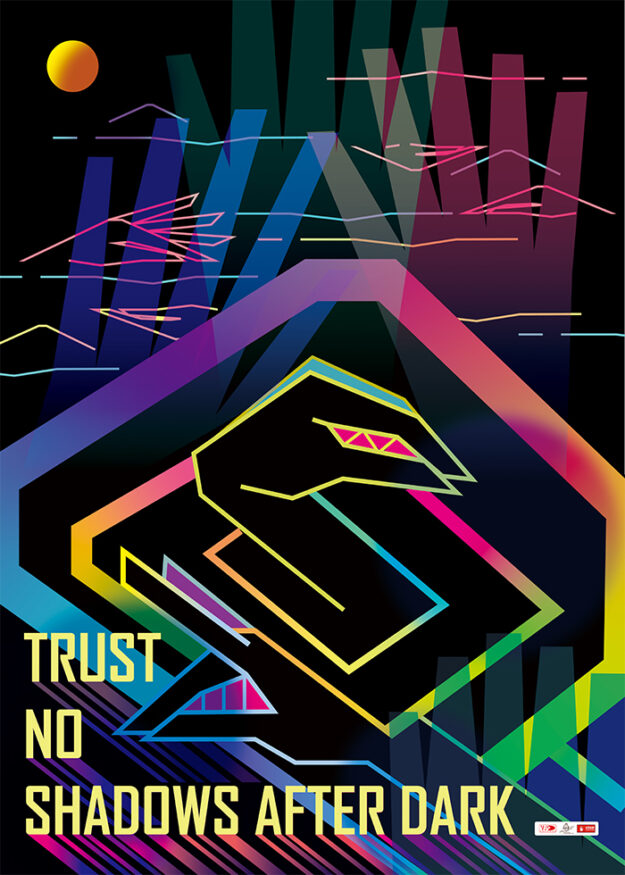 The poster uses hand shadow game to express the theme of shadow after dark, symbolizing the innocence and cruelty in the problem of human trafficking, in order to arouse reflection and warning. Hand shadow is used to show the shapes of snake, fox, jungle, mountain and river, corresponding to the scene association mentioned in the lyrics. Snake and foxe are symbols of violence and deception in human trafficking. The snake is the symbol of danger and evil, and the snake eye is made up of sharp teeth; the fox is the symbol of cunning and deception, and the fox eye is made up of cold fence. The composition of the picture is composed of coiled snake tails, symbolizing the state of being trapped and difficult to get rid of. There are forests, mountains and rivers in the background, symbolizing a seemingly peaceful world. In terms of color, it is mainly black, supplemented by gradient color, with strong contrast. It not only wants to express the above theme, but also wants to express the music rhythm in the lyrics. 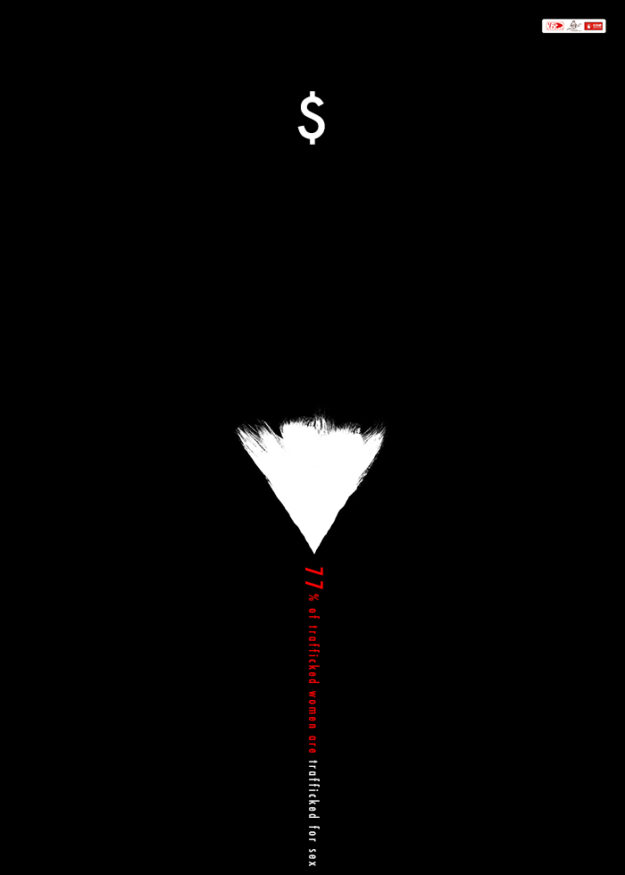 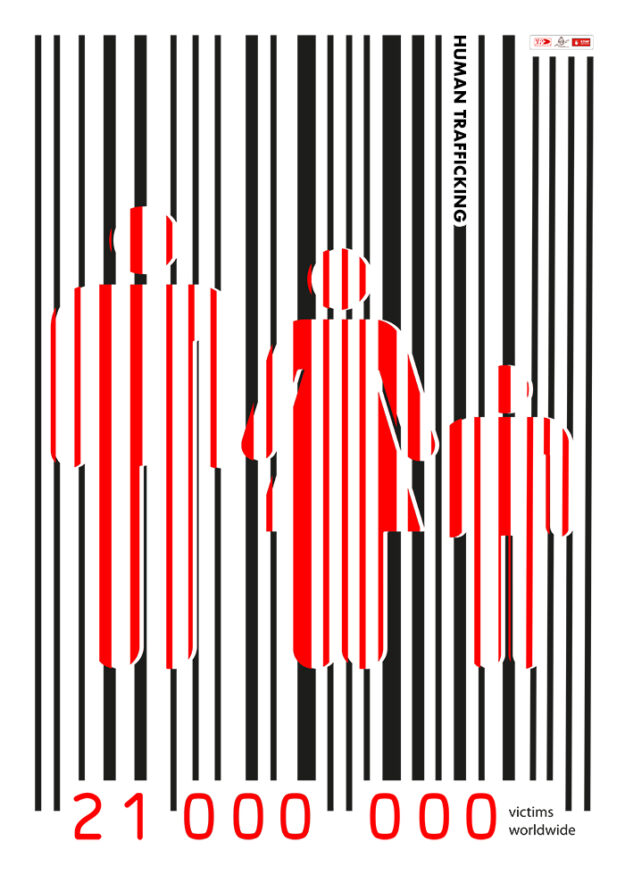 The number of victims of human trafficking is estimated to be around 21 million worldwide. A composition consisting of a barcode and pictographs of a man, woman and child.