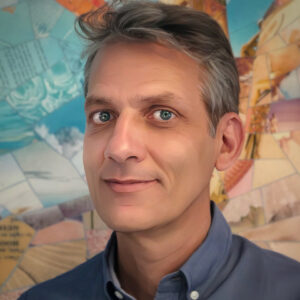 Charis Tsevis is a Greek visual artist living and working in Pafos, Cyprus.
He holds a Diploma of Graphic Design from the Akademie für das Grafische Gewerbe, München and a Master in Visual Design from the Scuola Politecnica di Design, Milano.
He manages a modest studio serving clients all over the world.
His client list includes companies like Nike, Google, Ferrari, PepsiCo, Toyota, and IKEA, advertising agencies like TBWA\Chiat\Day, Saatchi & Saatchi LA, DDB Munich, and Leo Burnett Hong Kong, and media like Time, Fortune, Wired, and The Wall Street Journal.
Charis is a visiting professor of Editorial Design and Typography at the AKTO College in Athens since the year 1996. He has also presented seminars at the Panteion University of Athens and he has given lectures in numerous national and international conferences and symposiums like the International Conference on Typography and Visual Communication, the TEDx Athens, the Adobe D-Day, and many more.
Charis is often writing articles about design theory, aesthetics, and the history of computing in some highly respected art and IT magazines in Greece (+design, RAM, etc).
He has also written 2 books about Adobe Photoshop.
Charis’ work is awarded in ED Awards (Europe), Epica Awards (Europe), NPSA (USA), Behance (USA), EBGE (Greece), and others. He is named 3 times in a row as one of the 200 World Best Illustrators by Lürzer’s Archive.
His work has been featured in many books, magazines, and websites around the world.
His artwork has been presented in exhibitions in Athens, Barcelona, San Jose, and other cities around the globe. Since 2016 Lumas is selling a series of his art.