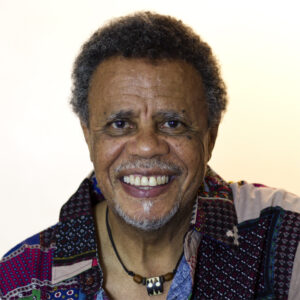 Designer, filmmaker, educator and activist, Chaz Maviyane-Davies has been described by the UK’s Design magazine as “the guerrilla of graphic design”. Debbie Millman, of Design Matters, called him “one of the most powerful voices in the world of graphic design.” For over four decades this controversial, award-winning artist has marshaled the power of design to enable effective communication for social change, taking on issues of consumerism, health, nutrition, social responsibility, the environment and human rights.

He achieved an MA in Graphic Design and an Advanced Diploma in Postgraduate Film-making from the Central St. Martins School of Art and Design London. He spent a year in Japan studying three-dimensional design and ten months in Malaysia working on various world-reaching design projects for the International Organization of Consumers Unions and JUST World Trust.

From 1983 until 2000 he ran a highly acclaimed design studio in Harare, Zimbabwe; The Maviyane-Project. The social and humane nature of his work was often confrontational and challenging to the authorities, so it was not surprising that, in 2001, with the adverse political climate at the time, he felt compelled to leave his homeland for a post at the Massachusetts College of Art and Design in Boston. He taught there until 2016, where he is now Professor Emeritus of Design.

He was recognised with the 2018 AIGA Boston Fellow award. The highest distinction an AIGA chapter can bestow upon one of its members. In 2009 the University of Massachusetts Lowell conferred on him an Honorary Doctor of Humane Letters degree. He is also the recipient of the inaugural Anthon Beeke International design award in Amsterdam and recognised by the Museum of Fine Arts, Boston with an award for outstanding innovator in his commitment to the struggle to transform society and create a just future.

His work has appeared in scores of international magazines and newspapers and he has been acknowledged in many publications. It has also been included in permanent collections in various galleries around the world and has been seen at over 200 extensive individual and group exhibitions. He has lectured widely and been a judge in many international competitions. His work is included in several international permanent collections in various galleries.

He has won several International and National awards for design and advertising.