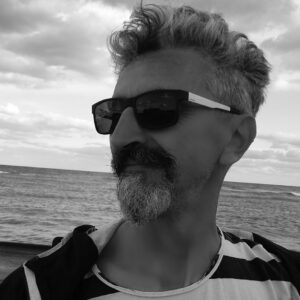 Born and bred in the west of the country, in one of the largest industrial cities of communist Romania. He left the city of his birth during the second half of the 90s, and after five years of studying drawing, mural art, traditional techniques and book design at the Bucharest University of Arts, he completed a further year of advanced studies in aquaforte etching at the same institution.

Having had various jobs in printing, advertising and publishing, in 2005 he co-founded Atelierul de Grafică, a graphic design studio specialising in book design, publications, event graphic design, printing, and research.

Eleven years ago he began a research project with a focus on Romanian graphics produced during the communist era: posters, fonts, logos, and advertising. Ironically called “Graphics Without Computers”, the project resulted in the publication of four books under the imprint Atelierul de grafică București and another in collaboration with the Berlin publisher Gestalten (Iron Curtain Graphics – Gestalten 2012) – all of which were reviewed favourably in international specialist publications. This research also gave rise to the internet platform GraphicFront.ro, with its two main components: an image archive of old graphics dating from the communist period and a blog focused on cultural news.

In 2018, against a backdrop of political disillusionment and constant street protests in Romania, he created the Roar Poster Show, a socio-political poster project with both national and international participation which took the form of five exhibitions, workshops, and talks in Bucharest and two other cities around the country.

Currently, while also working on a trilingual book, he has begun working on something he first began thinking about three years ago: Bucharest Graphic Days – the first Romanian event dedicated to graphic design in all its forms which aims to shine a light on the work of graphic designers in Romania (as well that of its international guests), highlighting the state of maturity their profession has achieved.

Ciprian lives and works in Bucharest or wherever he’s needed. In his free time, he rides two carbon bicycles and a velocipede. One at a time.