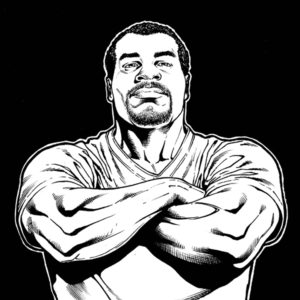 Nicholas Da Silva is the founder and creative director/producer of ZOOLOOK, an independent mixed-media agency, a publishing house and record label based in San Francisco, CA. Through ZOOLOOK, Nicholas develops entertainment properties that promote a multicultural experience. Nicholas Da Silva is also a musician and producer who goes by his artist name, ZOOLOOK.
He is the creator of DREAD & ALIVE, a Jamaican-inspired mixed-media series spanning comic books, novels and music and HITLESS, the first digital comic book/music series produced for the fourth-generation iPod and SONY PSP. The series featured an original soundtrack produced as the background theme for the comic book series. The award-winning series got Nicholas featured in Web Designer Magazines HOT 100 for 2008 three times. It also garnered Nicholas his very own Web Designer issue (#143) where he shared his creative vision to the masses. Nicholas was also selected as 1 of 100 designers in the world to be called the Chosen One by Adobe in 2008.
In 2011, Nicholas was nominated for the 2011 Glyph Awards in the Rising Star category for his work on Dread & Alive. He’s also been featured in Riddim Magazine (Germany) and is the only 4-time recipient of Web Designer Magazine’s HOT 100 honors (2008-2011). Nicholas has also appeared on NPR, CNN, ABC, and AfroPunk.
He is currently the founder and publisher of IRIE, the global reggae magazine & reggae music channel covering reggae music, art, and culture!  Nicholas is also working on the next story arc for his Dread & Alive series, entitled Nine Night. The project is a script for an episodic tv series based on the comic book series.
URL: www.zoolook.com
Go to Top