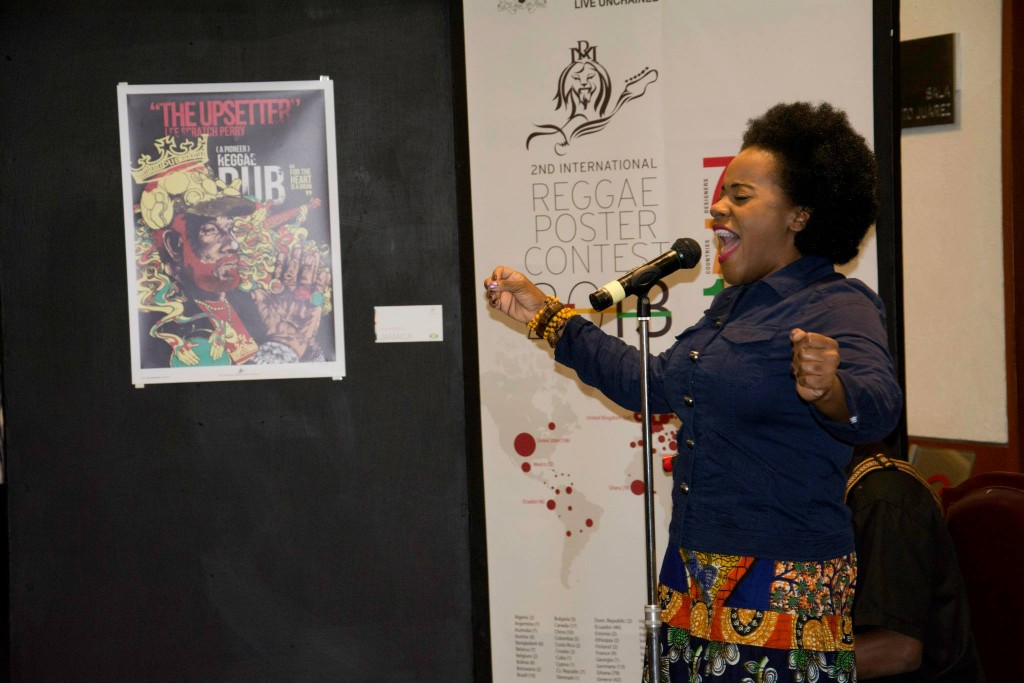 Recently, for the first time in Mexico, the Secretariat of Foreign Affairs in Mexico City was rocking to the heart throbbing sounds of roots reggae music. The occasion was the opening of an exhibition of 50 poster art from the 2012-2013 International Reggae Poster Contest (IRPC) collection. This exhibition brought together key poster designers works from 25 countries. The IRPC World-A-Reggae exhibition in Mexico represented the sixth showcase of reggae poster designs from the contest’s two year history. This extraordinary exhibition included contributed works by distinguish designers Charis Tsevis from Greece, Roy Villalobos from the United States and Yossi Lemel from Israel. It was quite an exciting moment to see and experience reggae vibrating through the large exhibition space at the secretariat. The Jamaican reggae singer, Etana, performed songs from her latest CD “Better Tomorrow.” Selector Mike Dread, resident DJ and musical director of Mexico’s reggae club, Kaya Bar, kept the audience rocking to the positive sounds of Bob Marley, Peter Tosh, Marcia Griffiths, Gyptian, Shaggy and other reggae selections. Jointly, hosted by the Embassy of Jamaica in Mexico and the Mexico Secretariat of Foreign Affairs. The exhibition was opened by the Hon. Vanessa Rubio Márquez, Vice-Minister for Latin America and the Caribbean, and H.E. Sandra Grant Griffiths, Ambassador of Jamaica to Mexico. While on holiday, Ambassador Grant Griffiths visited the Jamaican embassy in the U.S capital and there she discovered the International Reggae Poster Contest. It was clear to Ambassador Griffiths that this would be a wonderful exhibition to share in Mexico. The IRPC welcomed the invitation and the opportunity to exhibit the posters to a Latin American audience, especially that the third place winner of the 2013 contest, Lenin Baru Vásquez Felipe, and other contestants and jury member Elmer Sosa were all from Mexico. The timeline was tight and in a few weeks, the ambassador and her staff – Ms. Tanya Henry, First Secretary and Ms. Elizabeth King, Attache/Executive Assistant – had organized sponsorship for the first Reggae Month celebration and the IRPC exhibition in Mexico City. The sponsors included the Jamaica Tourist Board, Appleton, Huawei, VP Records and Solar. The IRPC exhibition opened on February 28, which is also designated “Jamaica Day” by the Jamaican Government. On March 3, there was a large gathering at the Jamaican Embassy, in Mexico City, featuring a troop of Mexican Rastafarian Nyahbinghi drummers. Also in attendance were members of the Rastreando el Reggae Collective, Carolyn Cooper, a professor of literary and cultural studies at the University of the West Indies, Mona Campus, Jamaica. Professor Cooper gave a talk on “Rastafari Reggae History Lessons” to a very eager and enthusiastic audience. The following day, Professor Cooper also gave a second lecture at the Matías Romero Institute on “Global Reggae in historic Centro Districto on the topic of “Jamaican Popular Music and the Politics of Cross-Cultural Communication.” As professor Cooper stated, “The lecture focused on the way in which the globalization of reggae has resulted in the adaptation of reggae music to suit local tastes.” This lecture was well supported by Mexicans from all backgrounds who were eager to learn more about reggae and Jamaican culture.

The International Reggae Poster Contest Exhibition, in Mexico City, can be categories as one of our most successful events. Thanks to all our partners and sponsors for making this a success.

Professor Carolyn Cooper presents her Global Reggae book at the Embassy of Jamaica in Mexico City. Next to her, Rastafarian Ras Ariel.