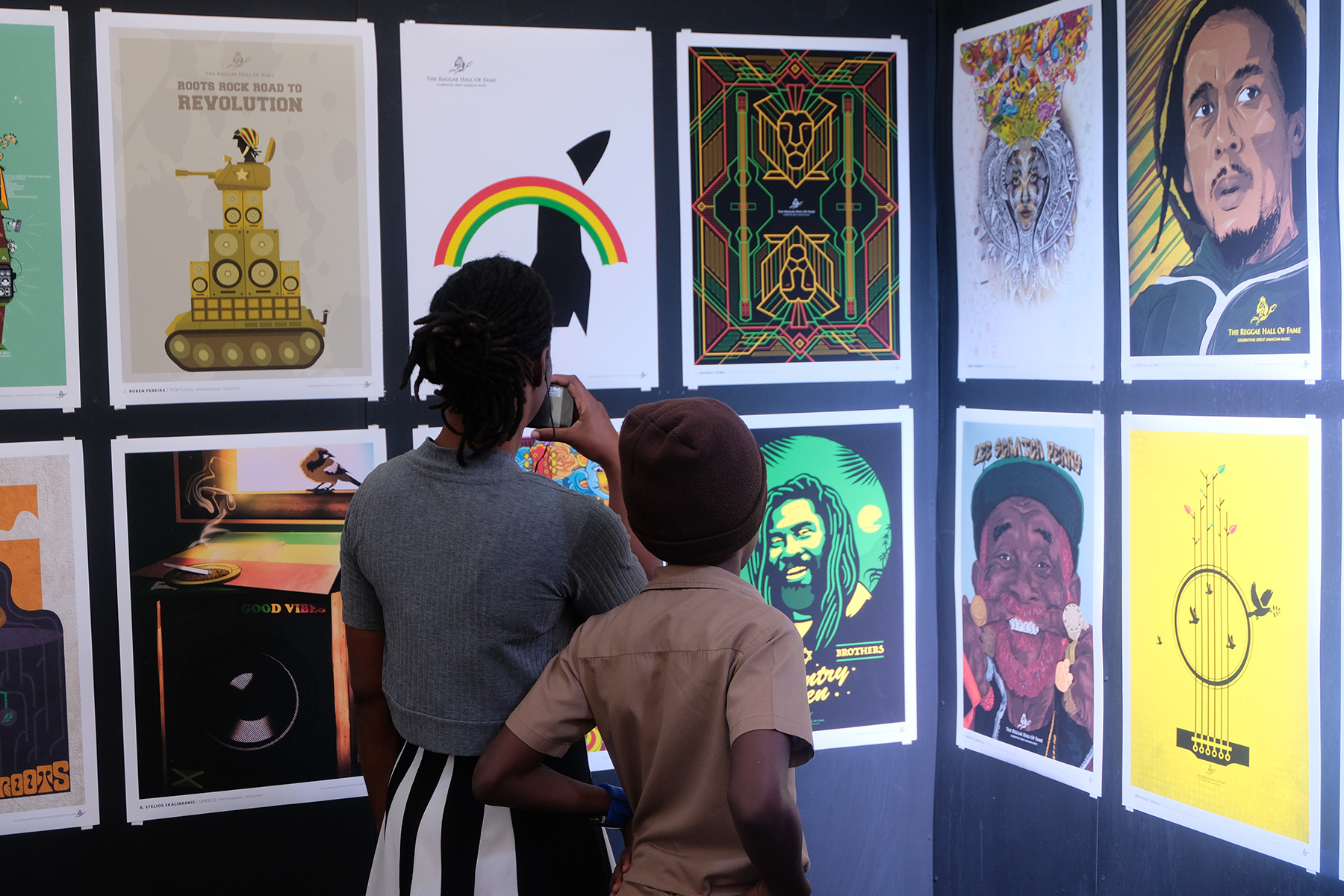 MBJ Airports Limited, operator of Sangster International Airport (SIA), hosted the 24th Art of Reggae Exhibition on November 30, 2018.  This was the second year in a row that MBJ supported the exhibition.  The red-carpet affair was the culmination of yearlong celebrations marking MBJ’s 15th anniversary as operator of the airport. The courtyard outside the departure terminal was transformed with tents displaying the reggae posters.  The brand-new ‘I Love Montego Bay’ sign was a vivid focal point of the décor.

Proceedings kicked off with the announcement of winners of the School Art Competition, organized in a partnership between MBJ and the Ministry of Education, Youth and Information.  The categories were poster and 3D/Mosaic design, and entries came from both primary and secondary school students.  Then there was a “Trashion Show,” featuring designs, all made from recycled garbage, constructed by airport staff. Contestants represented 10 companies operating at the airport, including American Airlines, Virgin Atlantic and Express Catering.  There were also exciting dance and musical performances. Dance students from the Edna Manley College of the Visual and Performing Arts put on a great show. The Tennshann Invasion Band was on top form and headliner Agent Sasco had the audience rocking during his brilliant hour-long set.

Gleaner columnist and cultural analyst Professor Carolyn Cooper gave a lively talk on the importance of the International Reggae Poster Contest.  It was founded by the late Michael “Freestylee” Thompson and fellow graphic designer Maria Papaefstathiou to showcase poster designs by artists from across the globe, all paying homage to reggae music.  The Contest is a platform for sustaining Thompson’s vision of a world-class Reggae Hall of Fame in downtown Kingston.

Vinicio Sejas of Bolivia was the winner of the 2018 contest.  His poster was selected from 1,060 entries submitted by 582 designers, representing 68 nations.  He was a guest of honour at the event.

Rafael Echevarne, CEO of MBJ airports also affirmed the value of the Contest: “The collaboration with the International Reggae Poster Contest fits perfectly with our vision of creating the Irie Airport Experience. As the leading entry point for visitors to Jamaica, it’s only natural that we should showcase the work of talented artists from across the world as they pay tribute to this island’s singular music and culture, finally recognized by UNESCO for its invaluable contribution to the world’s musical heritage.”

The 25th Art of Reggae Exhibition opens on the 12th of February at the National Gallery of Jamaica.  It’s a return to roots.  The very first International Reggae Poster Contest exhibition was held there in September 2012.  Dubbed, “World-A-Reggae”, the exhibition theme paid tribute to the lyrics of Ini Kamoze, “World a reggae music on ya” (there’s whole world of reggae music here).  The 2019 exhibition vibrantly confirms that there’s a whole world of reggae posters celebrating Jamaican music, a global cultural treasure!