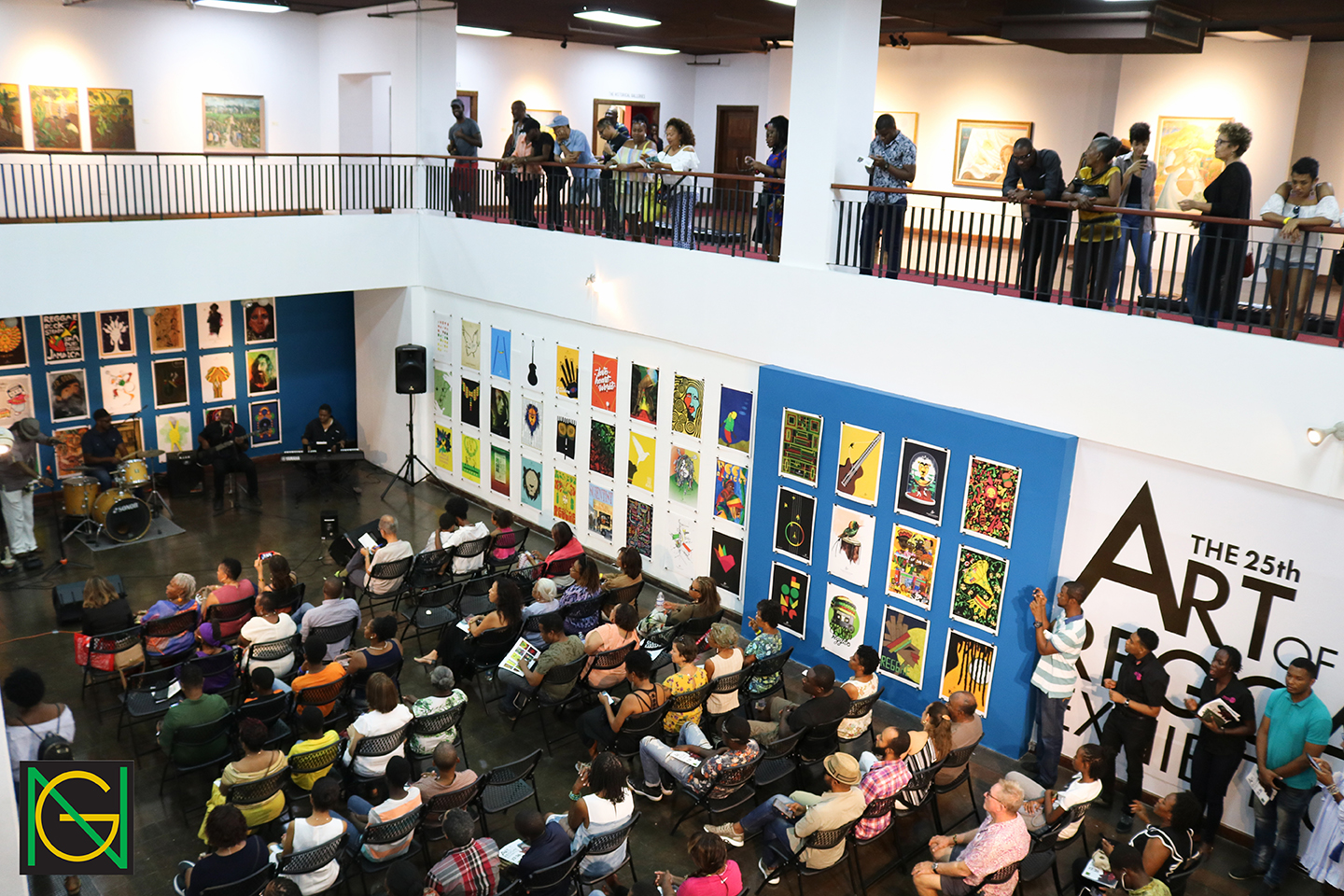 On Tuesday, February 12, 2019, the 25th Art of Reggae Exhibition opened at the National Gallery of Jamaica (NGJ). It features the top 101 entries in the 2018 contest and highlights the winning poster by Vinicio Sejas from Bolivia. A reception was held on March 31 to celebrate the exhibition. O’Neil Lawrence, Senior Curator at the Gallery, chaired the lively proceedings. In his opening remarks, he reminded the enthusiastic audience that the very first International Reggae Poster Contest exhibition was held at the National Gallery in 2012.

Lawrence noted that, “Since then, the competition has grown and its reach has expanded . . . and now it has, in a sense, returned home.” He expressed the hope that the International Reggae Poster Contest exhibition would become a more regular feature of the programming at the National Gallery. Lawrence also underscored the fact that the posters were hung in the Gallery’s “most public space.” This was, as he put it, “a deliberate choice” to pull viewers in. Cultural critic Carolyn Cooper echoed Lawrence’s words in her remarks as she compared the placement of the posters in the 1st and 25th exhibitions. She observed that, for the inaugural exhibition, the posters were mounted in the inner galleries. This signalled acceptance of their legitimate place within the National Gallery. But their placement was, ironically, rather conventional. The posters had now been dubbed as upper case Art.

By contrast, the location and layout of the current exhibition are much more imaginative. Instead of being dispersed throughout the inner galleries, the posters are concentrated in a single space. The exhibition simulates the in-your-face immediacy and impact of street art. It mirrors the 24th exhibition which was held outdoors at the Montego Bay International Airport last November and attracted a huge audience. Maria Papaefstathiou, co-founder with Michael ‘Freestylee’ Thompson of the International Reggae Poster Contest, flew in from Greece for the occasion. She spoke with passion about meeting Thompson online and learning about his big dream: “Very soon, he told me about his vision to see a grand museum on Reggae in the city of its birth, Kingston. He conceived it as the Reggae Hall of Fame Museum and Performance Centre.

For Michael, this museum should be an architectural masterpiece that could attract visitors from all over the world. It would not only be a place to learn about the history of reggae. The building itself would be a work of art, in the league of iconic buildings such as those conceived by Frank Gehry, Michael’s favourite architect. The contest would also support the work of the Alpha Boys’ School, a major incubator of Jamaican music.”

Papaefstathiou reported that when the first competition was launched in December 2011, 1150 posters were submitted. These were created by 678 designers from 80 countries. Over the last seven years, there have been 6 competitions and 25 worldwide exhibitions. More than 6000 posters have been submitted. She noted that, “This flowering of creativity confirms that Jamaica has touched the consciousness of the entire world.” Papaefstathiou also drew attention to the fact that there are many poster contests in the world of design and the arts that focus on a wide range of social issues such as the fight against poverty, war, environmental degradation and victimization of refugees. She proudly affirmed that, “There is only one competition on reggae. And our International Reggae Poster Contest can encompass all of the issues found in other social message contests. Because these are the messages that Reggae music talks about. These are the messages you see on the posters in this Contest.”

Papaefstathiou asserted that, “These iconic posters represent a powerful visual narrative declaring that reggae is loved worldwide and its vibrating sound-waves continue to reach far and wide.

The sounds of Jamaican music certainly vibrated at the National Gallery. The Pimento Band gave a spicy performance covering a broad range of music: calypso, mento, ska, jazz, reggae. The band, a perfect complement to the exhibition, seduced the enthusiastic audience to dance. The event was a beautiful fusion of the visual and performing arts. The exhibition continues until the 26th of May.

The full text of the speeches of Carolyn Cooper and Maria Papaefstathiou is reproduced on the IRPC website www.reggaepostercontest.com.