“The Art of Reggae” in Chetumal, Mexico 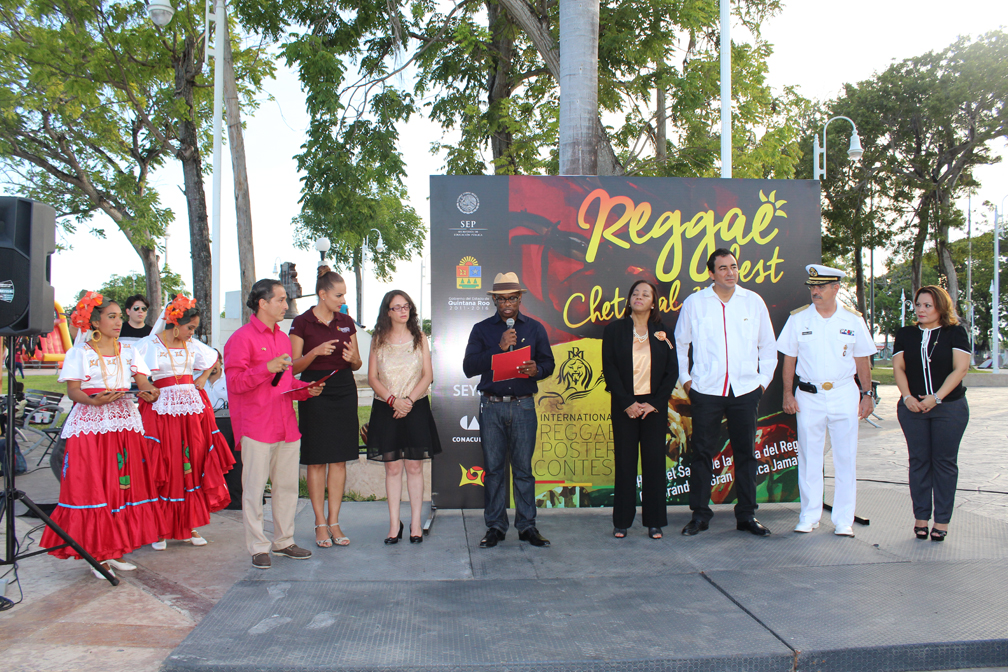 The 13th International Reggae Poster Contest Exhibition, “The Art of Reggae,” opened officially on August 14, 2015 at the beautiful Andador Héroes plaza in Chetumal, Mexico. It was a huge success. Hosted by the Secretariat of Public Education, the Government of the State of Quintana Roo, the Secretariat of Education and Culture of the State of Quintana Roo, and the National Council for Culture and the Arts, the exhibition showcased works of 72 top posters from artists and designers worldwide. The IRPC Chetumal exhibition drew thousands of visitors during the 1st International Reggae Fest 2015, held in the city from August 14-16. The special IRPC exhibit featured posters by the top winners from all three years (2012-2014). It also included a selection of Mexican winners. To mark the 70th anniversary of Bob Marley’s birth, the exhibition highlighted posters from the growing collection celebrating the legendary reggae artist. In attendance at the opening ceremony were the Jamaican Ambassador to Mexico, Sandra Grant Griffiths, JP; Mayor of Chetumal, Eduardo Espinoza Abuxapqui; Secretary of Education and Culture of the State of Quintana Roo, Jose Alberto Alonso Ovando; Sub-Secretary of Culture, Villanueva Chan; Director of the Museum of Mayan Culture, (add name); Monica Vega and Guillermo Mujica of Cultiva Reggae; and IRPC co-founders, Michael Thompson and Maria Papaefstathiou. Also present at the ceremony were top officials of the Mexican Navy and Armed forces based in Chetumal. Since 2012, the IRPC has curated 13 major international exhibitions. This special staging in Chetumal confirms the continued growth and international reach of the contest. It is the 5th to be staged since the beginning of this year: in Greece, Cyprus, Cuba and twice in Mexico! The distinctive Chetumal exhibition was our first major outdoor show. It gave the general public easy access to enjoy all 72 posters throughout the 3-day festival. The posters were mounted on specially constructed display panels that formed a long corridor along the newly renovated pedestrian plaza. The enthusiastic reception of the exhibition in Chetumal eloquently confirms the love of reggae music and Jamaican culture in the city and state. It was a wonderful experience for the IRPC founders. Speaking at the opening ceremony, Michael Thompson declared, “The success of the International Reggae Poster Contest can be a blueprint for how culture can help to unify people from all over the world and can inspire creative young people and graphic designers to use this creativity for awareness. This is an example of how an idea can grow quickly by using the powerful tools of technology and social media to build global initiatives for positive change and global acceptance.”

Maria Papaefstathiou and Michael Thompson were pleased to announce that the 72 posters on exhibit were a gift to the government and people of Quintana Roo, to be shared with other municipalities in the state and to be used to educate young people about the positive messages of reggae music. Secretary of Education and Culture of the State of Quintana Roo, Jose Alberto Alonso Ovando, thanked the IRPC organizers on behalf of the government and people of the state Quintana Roo.

The IRPC concept of Social Poster design powerfully engages a global community in a compelling and provocative fashion. It challenges an ever-widening audience into positive action in support of reggae. This is the International Reggae Poster Contest’s creative platform on which to present, promote and project a catalytic vision as stated in the contest theme – “Towards a Reggae Hall of Fame, Celebrating Great Jamaican Music.” The Chetumal exhibition was a brilliant manifestation of our inclusive vision.