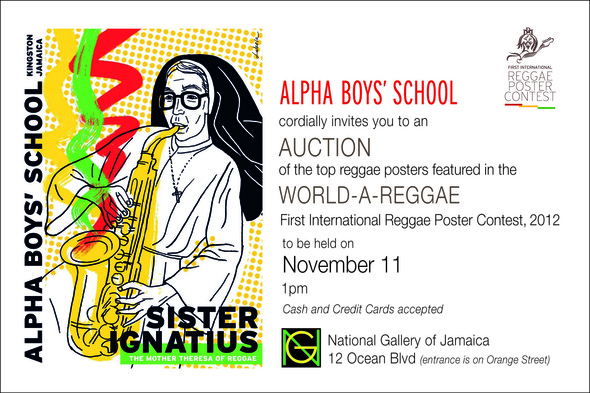 The Alpha Boys School and the International Reggae Poster Contest are very pleased to announce the auction of the top, limited edition posters from the contest, including special contributions from international poster artists, will be held on November 11 at the National Gallery of Jamaica in downtown Kingston. Douglas Reid of Grosvenor Galleries will conduct the auction and Bunny Rugs, lead singer of 10-time Grammy nominated act Third World, will serve as Celebrity Auctioneer. Click here to view the posters online. 100% of the proceeds will benefit Alpha Boys School. Interested parties who cannot be present for the auction but are interested in bidding should contact Alpha Boys School at [email protected]

From the simple to the sublime, the posters to be auctioned are currently the feature of a special exhibition entitled, “World A Reggae: the 100 Best Entries from the First International Reggae Poster Contest” which continues at the National Gallery of Jamaica until November 10. Comprised of the top 100 posters as well as original contributions from artists Luba Lukova, Juan Carlos Darias, Elmer Sosa, Roy Villalobos, Freestylee (the artist alter ego of contest founder Michael Thompson), Maria Papaefstathiou  (the contest co-founder), and others, the posters represent a very special part of a world-wide conversation about Jamaican culture. A follow up exhibition is scheduled in Athens, Greece to open November 2012.

The auction in Jamaica brings the first reggae poster contest full circle a little less than a full year from when it began. Since launching in December of last year, the reggae poster contest has become the source of an international effort to promote reggae culture, both artistically and in terms of giving back to the community. While the contest and subsequent exhibitions (both in Jamaica and Greece) meet the creative challenge set forth by founders Michael Thompson and Maria Papaefstathiou, the auction addresses social challenges with all the proceeds from the auction to benefit the Alpha Boys School. Alpha is also the inspiration for many posters that bear its name, or in the case of Luba Lukova’s specially contributed poster, a likeness of the late Sister Ignatious, former administrator of the school and known as the ‘godmother’ of reggae music.

The first of its kind, the auction on November 11 will allow art lovers, reggae enthusiasts and fans of Jamaican pop culture to own a piece of history and support the Alpha Boys School at the same time. The Gallery will open its doors at 1 pm with the auction starting at 2:30 pm. Prior to the auction, the public is welcome to view the posters hanging on the Gallery walls for one last time. Buyers will be able to use major credit cards and cash. Checks will not be accepted. Payment is required on the same day. 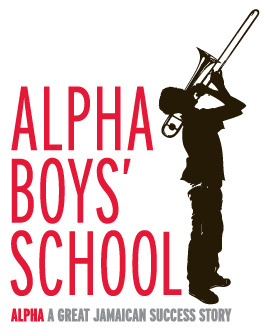 Alpha Boys School is a residential vocational school serving at risk boys between 8 and 18 years old. Since 1890, and in addition to providing a general education and training in trades such as agriculture, printing, tailoring and woodworking, Alpha’s music program has produced some of the world’s most respected and skilled musicians. Jazz men like Dizzy Reece and Jo Jo Harriot as well as ska pioneers Don Drummond, Lester Sterling, Tommy McCook and Cedric Brooks (founding members of the Skatalites) not to mention dancehall deejay Yellowman, among many others, have all called Alpha their home. The music program continues to be a trusted source for touring and session bands as well as for hotels and cruise ships. Today, about 100 boys who call Alpha home are working hard to be the next generation of Jamaican success stories.

The 2012 First International Reggae Poster Contest (RPC) began December 27, 2011 with the goal of discovering fresh Reggae Poster designs from around the world. Interest in the contest grew significantly over the 4-month run with a total of 1,142 submissions from 80 countries. The contest winners were chosen from 370 finalists by a distinguished panel of judges known for their creativity and commitment to design.