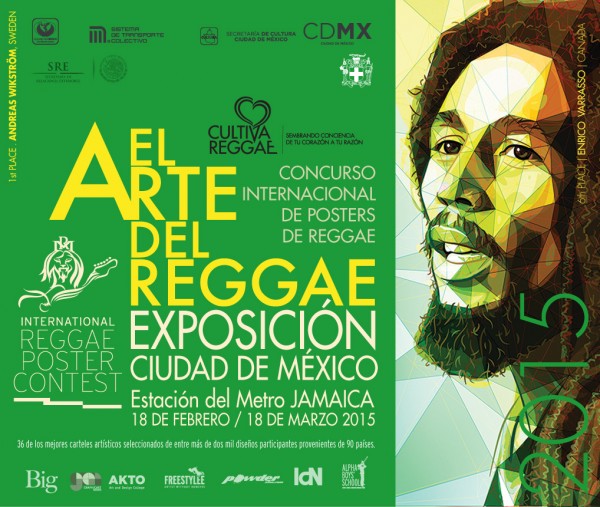 In celebration of the 70th anniversary of Bob Marley’s birth, and Reggae Month Mexico, the co-organisers of the International Reggae Poster Contest (IRPC), Michael ‘Freestylee’ Thompson and Maria Papaefstathiou are pleased to be exhibiting, on the 18th of March 2015, a very special collection of 36 posters of the reggae icon Bob Marley in the Mexico City Metro System (Sistema de Transporte Colectivo). The exhibition will showcase images from the contest’s growing poster collection. The selected posters comprise designs from participating designers from Mexico and various countries, including Iran, Cuba, Romania, Croatia, Canada, Greece, Poland, Mexico, South Korea and the United States. All coming from talented designers who placed among the top 100 winners from the 2012 through 2014 contests.

Following in the footsteps of Marcus Garvey, Bob Marley has carried forward the vision of emancipation from mental slavery: “we refuse to be what you wanted us to be. We are what we are and that’s the way it’s gonna be. We’ve been trodding on the wine press much too long. Rebel”. Bob Marley has bequeathed to the world an everlasting legacy of rebellious creativity.

“In his song ‘Bad Card’, Bob Marley boasted, “dem a go tired fi see mi face”. Of course, this boast meant that he wasn’t going to be tired of his own popularity. Bob’s prophecy has certainly been fulfilled. And as the international Reggae Contest so graphically confirms, artists across the world will never get tired of imprinting on Bob Marley’s face their brilliant interpretations of the life and legacy of Jamaica’s global icon.” —Dr. Carolyn Cooper, Editor of the Global Reggae Book

This exhibition is created by Cultiva Reggae and Sistema de Transporte Colectivo. The exhibit was also made possible with the generous support of the Secretaría De Cultura Ciudad De Mexico, Secretaría De Relaciones Exteriores, and the Jamaican Embassy in Mexico.