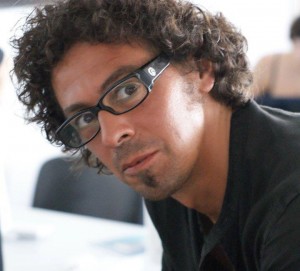 Sergio Olivotti, adjunct Professor at the Politecnico di Milano (from 2006 to 2011) and Professor of Graphic Design at Istituto Secondario Superiore in Finale Ligure, focuses his research on social design and visual communication. He published ”Segni e Disegni” (2004), ”Teckno” (2006), ”Lezioni di Visual Design” (2008). He teached in workshops at Design and Art School of Murcia, Seville, Jerez de la Frontera, Soria (Spain). He was juror in many international contests such as Skopje Poster (Skopje, 2010), Haiku (Caracas, 2010), The spirit of FIFA (South Africa, 2010), Posterfortomorrow (Online Juror, 2011), Green+you (Sout Corea, 2011). He conceived and edited the following competitions and exhibitions: 2011 Seeds of Peace: the power of dialogue; 2010 “Design vs Poverty” 2009 “Poster Design Contest: Autism”; 2006 “La donna (mal)trattata” with Artishock; 2000 “Salami without legs: young artists in Savona”. His posters was exhibited in many places around the world. www.olivotti.net/

The portuguese ministry of justice sent to all the prisons an invitation to participate this contest. The directress of the prison of Braga asked me if I was interested in participate. I quickly accepted because I am a teacher of arts and I have goal in this project. These kind of projects are very important because they sensitize the prisoners for the signification of the art in our days. This theme is very popular in our society. Mainly because Bob Marley is a idol and a inspiration to my st… END_OF_DOCUMENT_TOKEN_TO_BE_REPLACED